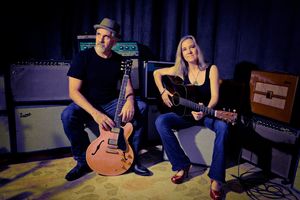 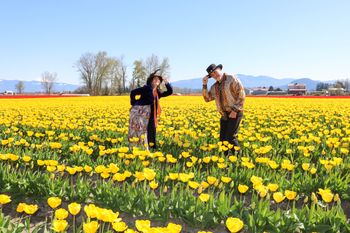 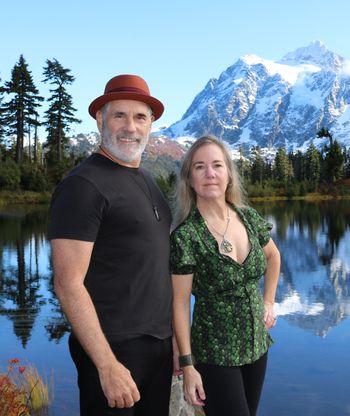 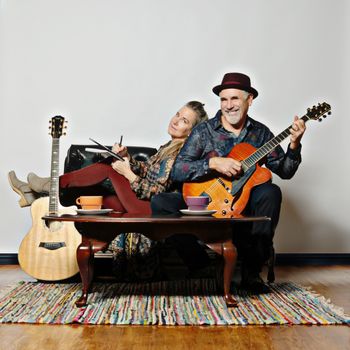 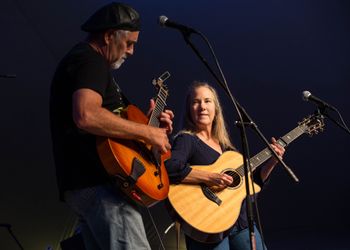 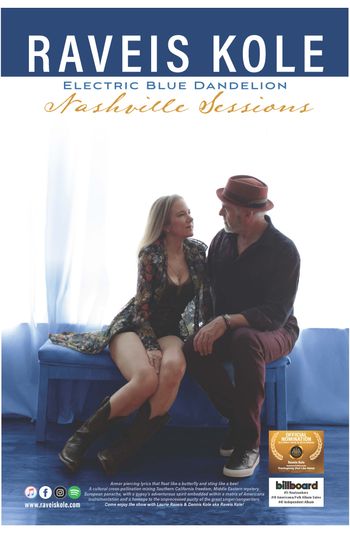 Seated tables and chairs for a happy hour Monday performance by husband/wife singer-songwriter duo, Raveis Kole! The duo will share a sneak peak of some new songs off of their upcoming acoustic album, "Sticky and Sweet" recorded in Austin, Texas as well as original favorites such as "Street Penguins" and "Thanksgiving (Feel Like Home)", and also selected covers by artists such as Johnny Cash and John Prine! Wonderful food, coffees and drinks available! This is a free event!

Join Raveis Kole, Bellingham singer-songwriter duo serving up their Billboard charting originals, curated covers and positive vibes on the natural outdoor amphitheater with a tents of seating, food and libations!

The Theme for the 2022 Tumbleweed Music Festival is "Dear Friends!" This brings the feeling of joy we'll have when the Tumbleweed Family again gathers live in Howard Amon park along the Columbia River for this year's festival! We will be playing 4pm on Sunday on the South Stage. In addition, we'll be sharing our song, "So Nice" in the Dear Friends Concert at 6:30pm on the South Stage.

Laurie Raveis & Dennis Kole (Raveis Kole) will be playing a seaside acoustic and electric performance with our originals, and new songs off our upcoming album, "Sticky and Sweet"! and selected covers on the beautiful Semiahmoo Spit with White Rock, BC on one side and Mount Baker on the other. Come join us for great tunes, atmosphere, food and fun!

Laurie Raveis & Dennis Kole (Raveis Kole) will be playing a seaside acoustic performance with our originals, plus new songs from our upcoming album, "Sticky and Sweet"! and of course selected covers on the beautiful Semiahmoo Spit with White Rock, BC on one side and Mount Baker on the other. Come join us for great tunes, atmosphere, food and fun!

A natural amphitheater garden with tables, lawn seating or bring a blanket! Check out music on Spotify, Apple Music, YouTube or Amazon under "RAVEIS KOLE". Sign up for our newsletter at www.raveiskole.com

Raveis Kole take the stage to share their new tunes, "True Is Beautiful" and yet to be recorded, "Sticky & Sweet" along with their Americana Indie originals and curated covers. The live venue has a new big rock vibe with all the same old woolley comfort!

A supper club with the acoustic original music of Raveis Kole featuring True is Beautiful, Help One Another (We All Can) and special arranged covers such as John Prine's Angel From Montgomery and Jason Isbell Am I the last of my kind. Join us!

Join Laurie Raveis and Dennis Kole for an evening of music with great seating, food and scenery!

Laurie Raveis & Dennis Kole (Raveis Kole) will be playing a seaside acoustic performance with our originals and selected covers on the beautiful Semiahmoo Spit with White Rock, BC on one side and Mount Baker on the other. Come join us for great tunes, food and fun!

Join us on Friday in the large outdoor beer and wine garden at Skylark's in downtown Fairhaven, serving up great food and music for decades. Laurie Raveis and Dennis Kole perform as duo, Raveis Kole

Come by this outdoor event 'Under the Big Tree' at the Firehouse Performing Arts Center featuring artists (sculpture, paintings, plants and more) and live music featuring the duo of Laurie Raveis & Dennis Kole aka Raveis Kole.