How Do Musicians, Actors, Singers And Performers Benefit From The Alexander Technique? 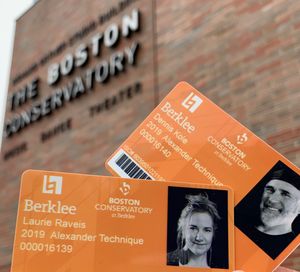 Laurie and I recently had the privilege of taking a week long intensive program in the Alexander Technique offered by the Boston Conservatory at Berklee College of Music. We were part of a small group (6 total), who ranged from an opera singer, to a speech therapist to a trumpet player. It was a great experience, but what was it for and why were so many performers interested in it?

The short answer is that the Alexander Technique is short on dogma, but long on careful observation and guided identification of our habitual somatic and movement patterns followed by the identification of alternative possibilities that may facilitate more natural and effective posture and movement. This indirectly benefits our ability to perform by bringing an increased awareness to how we can best use our own body, and not just focusing on what we are doing with our voices or our instruments.

The Alexander Technique originated with F.M. Alexander, who was born in Tasmania in 1869. As a young actor in Australia, Alexander developed vocal difficulties when performing which led him to an extended period of self-observation and self-assessment. The insights which he gained in this process formed the foundation of his subsequent teaching in this area, and his pupils included luminaries such as George Bernard Shaw and Aldous Huxley.

The Alexander Technique has evolved into a world wide, professionally accredited network of teachers/practitioners. It’s focus on somatic observation and assessment is shared, to varying degrees, by other practitioners and modalities such as Moshe Feldenkrais, Milton Trager; and by the structural integration precepts of Ida Rolf and Joseph Heller. More recent pupils of the Alexander Technique have included: Victoria Beckham, William Hurt, Sting, Hugh Jackman, Robin Williams, Madonna and Paul McCartney.

For Laurie and I, there is an obvious parallel to meditation in that you are tasked with paying attention and remaining aware of how you are choosing to use your body while also remaining open to consider the possibility of intentionally choosing to try something different. Because we are all creatures of habit, there is both an opportunity and a need to frequently revisit that moment of choice as we often revert to unconscious and habitual somatic and movement patterns.

An example of an “activity” we worked on as a group was to sit in a slumped, hunched forward position while working at the computer or at a piano.  We were led through a series of suggestions by Debi regarding alternatives. Most activities begin with considering the relationship of the sprine/neck and head. Here are some of the questions we considered with the suggested adjustments: How you are sitting? Is your head pulling down or back?  Try to center the head on the spine - are your legs and feet solidly connected and grounded so that you feel that you have a well supported base and are not simply placing all your weight on your chair or stool? Rotate your pelvis so that your spine sits naturally upon and over the sitting bones of your pelvis and align your neck and head as an integrated unit to sit comfortably upright at the top of your spinal column. Now consider allowing your arms to relax and to hang comfortably from your shoulder girdle. Rotate your palms so that they face upward and raise your forearms up to working level. From here, rotate your forearms into a working position. We were asked to take a moment to notice how these new adjustments felt and how this compared to our “normal” position.

As we learned, we are all different in the details of our structure so there is no absolute one right way to move, but the underlying lesson is that each of us has alternatives that we can choose to experiment with and to adopt as we desire. Just because something is familiar doesn’t mean that it is right; and just because something feels strange or novel doesn’t mean that it is wrong - perhaps it merely means that it is unfamiliar. It does, however, mean that any attempt to change a well established habit will require frequent “reminders” until sufficient practice has occurred to establish the new and improved habit.

In follow up to our class, I am currently reading: Indirect Procedures, A Musicians Guide to the Alexander Technique, by Pedro De Alcantara, published by the Oxford University Press in 2013. While our initial goal was primarily to augment our ability to perform, the benefits which we have received extend to all aspects of our daily life including walking, meditating (yes, Laurie shares that even her daily practice is improved) using the computer, driving a car and sleeping. The guidance, kindness and leadership of our teacher, Debi Adams (Alexander Technique Program Manager, Boston Conservatory at Berklee), the input and participation of our fellow students, and the structure provided by the intensive format, were an invaluable foundation for this experience.

About our teacher Debi Adams at Boston Conservatory at Berklee
https://debiadamsat.com/

More on our class at Berklee
https://bostonconservatory.berklee.edu/extension-programs/alexander-summer